04 Jan Back in the saddle again

Posted at 23:39h in Advokate by Kate Austin-Avon
Share 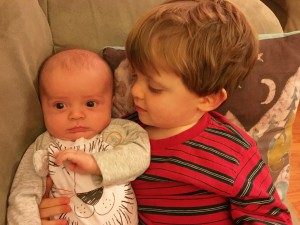 It’s always rough going back to the daily grind after the holidays — and can you imagine if January meant the first official back-to-work day in nearly two months? That was today. Our sweet baby Daniel was born on November 10, and I had been on maternity leave until today.

That’s not to say I was ever really gone from the business. Days before having the baby, we launched the new Tassels and Trim website. On our first day home from the hospital, we launched the Sutton’s website. During maternity leave, we also launched the Lake George Olive Oil Company website, designed the Broadway Upstate website, sent some press releases, did some maintenance, and came up with some designs.

But it was all a little more low-key than usual. I went at my own pace, around the kids. We’ve all been sick these past two months, too. So we all puttered around the house in pajamas, vegged out with screen time and took naps whenever the whim struck. We basically only left the house to go to the doctor’s office. A zillion times. I have made at least a hundred “up high buildings” with Henry out of Legos, and spent many hours snuggling Daniel on the couch, tickling his tiny monkey feet and kissing his soft baby hair. 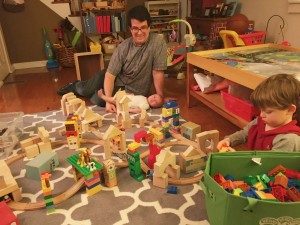 I’ve been really excited about my return to full time, though. After the kids went to bed, I stayed up late on Sunday night getting my to-do lists ready, and this morning I had everything perfectly in place. Rooibos tea in my yellow mug by Thaddeus Powers. Iron & Wine Pandora station streaming on our portable speaker from Adirondack Audio & Video (whose website we designed). I lit the Christmas Hearth soy candle from Vivienne’s Marquette. My three-year-old son Henry was at daycare, and we had a babysitter at our house to hold Daniel all day. The home office is nice.

I replied to emails, and spent most of the day working on Comedian Aaron David Ward‘s website. While I did miss my boys, it felt good to be productive. Like the first ski run of the season, that muscle memory as you flex and burn and stretch for the first time in a long while. I’ve got four websites to work on, a logo contract pending and some other regular stuff to do.