Posted at 15:57h in Uncategorized by Kate Austin-Avon
Share 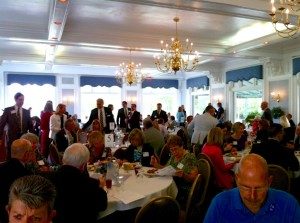 Well, today was one for the history books. Advokate was nominated for the Adirondack Regional Chamber of Commerce‘s 2012 Independent Business of the Year Award! The breakfast and awards ceremony was this morning, and so Cory and my in-laws drove to Lake George to meet my grandparents Mimi and Poppy and find our nametags and our table in Fort William Henry‘s beautiful White Lion Room overlooking the lake.

I was glad to realize I knew so many of the Glens Falls business community. Four or five years ago I covered a Washington County Small Business Awards Ceremony for the Chronicle and didn’t know a single person there — I remembered being nervous and awkward. I think it was one of the first things I covered, and I had to assert myself enough to assemble the award winners for a picture. I know it’s a different event, but it’s a similar group of people – and this morning I was shaking hands with the rest of ’em and folks were congratulating me on my nomination. It’s a good feeling to be a part of something, even as a relative newbie on the scene.

John Marcantonio at the Chamber is a big part of making you feel included — I think he must treat everyone like they’re good friends, but I still feel that way when I see him, and I was glad to introduce him to my family. I missed seeing his cohort Donna Smaldone today, who has that same friendly, charming air about her that puts you at ease and makes you feel special. 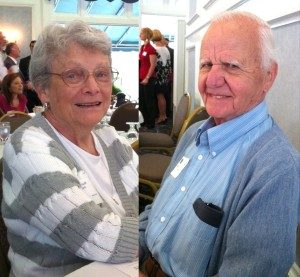 As the morning unfolded and the pattern of the nomination recognition and the expectations of the winners came into focus, I was nervous. I held Cory’s hand and smiled crazily at my grandparents and in-laws as we came closer to announcing my name.

What I noticed as the nominees were recognized is how many fantastic businesses we have here in Glens Falls. How fortunate we are to have so many innovative thinkers creating jobs as best they can, working to improve their communities and giving back. Everyone in that room was a winner, whether or not the committee picked them for a plaque. What I also noticed was that winners were giving little speeches. Yikes.

There were only two nominees in my category and McLaughlin Photography won it. My immediate thought was THANK GOD NO SPEECH FOR ME. And I learned that he’s been in business for 20-some years and is a member of Kiwanis and a very active and involved part of this group of businesspeople that I’m only just getting to know, so I can’t say I don’t think he deserved it over little startup Advokate, considering that the category was Independent, rather than Rookie (and dang, the folks in the Rookie category were ALL killer businesses). That long in business is something to be proud of, and what I aspire to! Congratulations to Jim McLaughlin on his worthy win!

As the ceremony continued, it hit me over and over how incredibly fortunate I was to be in the room, among all these winners. Advokate taken seriously as a small business, among these well-established businesses with many employees and a track record of success. Advokate, that not even two years ago was just an idea to chase and see what happened. Just something I made up out of a list of things I know how to do. Gosh, just being there felt pretty special, never mind standing up while the speaker introduced me and spoke about Advokate. Having my grandparents there just beaming at me was priceless. 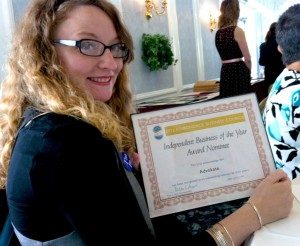 I try to count my blessings as often as possible, considering the low places I’ve lived in before — though even then I know I have been luckier than so many. It’s so easy to pile it all together and throw it at yourself when things seem dreary. Because of that, I aim to remember to do the same on a good day.

This has been a week for soaring high: This morning’s breakfast; my band The Skirts performed at the Beekman Street Arts Fair in Saratoga Springs on Sunday; and this afternoon my loving colleagues at the Shirt Factory are throwing me a baby shower. My 30th birthday is around the corner and I have a nice roof over my head, great neighbors, a supportive family (in-laws included – not everyone can say that!), an awesome husband, a healthy son on the way, a place in the community, a ragingly successful business, and I live in Glens Falls, a magical rainbowy place where dreams come true.

I hope to spread that sunshine around with Advokate, helping other people find their own rainbow to climb up on.

It’s a great view from up here.